On June 21, 2012, Ukrainian biggest rating agency "Credit Rating" confirmed the previously assigned credit rating of Piraeus Bank in Ukraine. The bank’s long-term credit rating was confirmed at uaA level with forecast "stable". This rating remains unchanged for 4 years (since its assignment on June 13, 2008).

According to the agency, the uaA rating is characterized with high creditworthiness of the bank compared to other Ukrainian obligors or debt liabilities. A stable forecast indicates that there are no reasons to change the rating during the year.

During the analysis the agency used the financial statements of the bank for 2010-2011 and for Q1 2012, as well as the inside information provided by the bank in the rating process.
The assignment of uaA rating for Piraeus Bank in Ukraine by the rating agency "Credit Rating" was influenced by the following factors: availability of support from the main shareholder, Piraeus Bank S. A., high liquidity and the balance of assets and liabilities by term to maturity, availability of the relatively cheap resource base that allows bank to maintain a competitive position in the financial market. 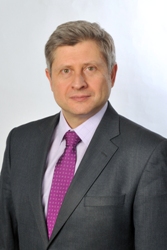 Vyacheslav Koval, Piraeus Bank in Ukraine Acting Chairman of the Board: "Confirmation of the bank's high credit rating is a reflection of the considered lending policy"

"Confirmation of the bank's high credit rating is a reflection of the considered lending policy and active work on resources’ attraction. Due to these factors, the bank maintains a high credit rating for 4 years already", Vyacheslav Koval, Piraeus Bank in Ukraine Acting Chairman of the Board, said.

In addition, the agency confirmed the Piraeus Bank deposits’ rating at the level "5" (highest reliability). According to the agency, this rating specifies the bank's minimum sensitivity to adverse business, financial and economic factors. The likelihood of problems with returning the deposits in time over the next 12 months from the date of the ratings’ publication is very low, “Credit Rating” agency mentioned. Piraeus Bank in Ukraine maintains the highest level of deposits’ reliability from March 2009.

Note. Piraeus Bank is one of the major banking institutions of Southern and Eastern Europe with assets of EUR 47.5 bln (as of 31.03.2012). Established in 1916, Piraeus Bank today is presented in Greece, Ukraine, Romania, Bulgaria, Albania, Egypt, Serbia, Cyprus as well as in the world financial centers of New York and London. Piraeus Bank S.A. leads Piraeus Bank Group, which consists of 10 banks and 21 companies covering the entire range of financial services.